Emmanuel - God is with us! 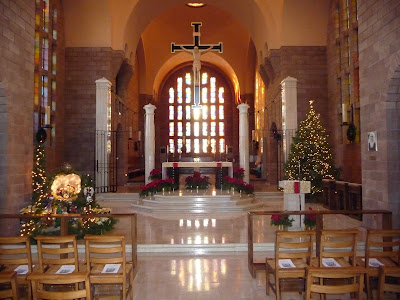 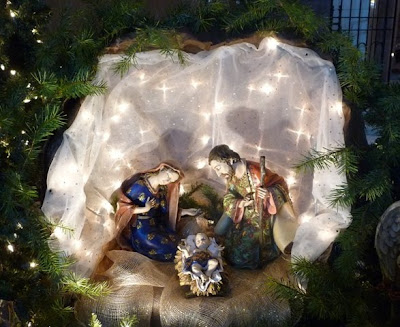 Detail of creche
This evening, at the start of Vespers, I had the privilege of chanting the Proclamation of the Birth of Christ. This text comes from the Roman Martyrology of December 24 and situates the birth of Christ within the context of salvation history.
In the five thousand one hundred and ninety-ninth year
of the creation of the world
from the time when God in the beginning created the heavens and the earth;
the two thousand nine hundred and fifty-seventh year after the flood;
the two thousand and fifteenth year from the birth of Abraham;
the one thousand five hundred and tenth year from Moses and the going forth of the people of Israel from Egypt;
the one thousand and thirty-second year from David's being anointed king;
in the sixty-fifth week according to the prophecy of Daniel;
in the one hundred and ninety-fourth Olympiad;
the seven hundred and fifty-second year from the foundation of the city of Rome;
the forty second year of the reign of Octavian Augustus;
the whole world being at peace,
in the sixth age of the world,
Jesus Christ the eternal God and Son of the eternal Father, desiring to sanctify the world by his most merciful coming, being conceived by the Holy Spirit, and nine months having passed since his conception,
was born in Bethlehem of Judea of the Virgin Mary, being made flesh.
The Nativity of our Lord Jesus Christ according to the flesh.
A Merry Christmas to all, and to all a goodnight!
Posted by FA at 9:46 PM