December 26
Feast of St. Stephen
My good blogger friend, J. of Greensboro Daily Photo, asked me if I would write a little about St. Stephen, as we celebrate his feast day today. J. and her husband are the original "Sacred Sunday" bloggers. Be sure to stop by Greensboro Daily Photo every Sunday and tell them that FA sent you.
St. Stephen was one of the early deacons of the Christian Church. He became the Protomartyr (first martyr of the Church) because of his death by stoning. His crime? Blasphemy against Moses and God. His prosecutors? An angry mob led by St. Paul (although at that time he was known as Saul of Tarsus).
For more information on St. Stephen, go to the source.
Read Acts of the Apostles 6:8-10 & 7:54-59. 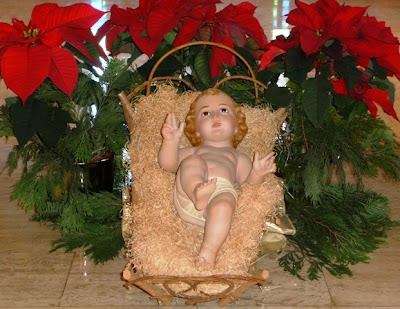 While most people are taking down Christmas today, the Church continues celebrating. Yesterday, Christmas day, began the Oktave of Christmas - 8 day liturgical celebration which turns Christmas day into 8 days, ending on January 1, the Solemnity of the Mother of God. After that, the Christmas season continues until the Feast of the Baptism of the Lord - this year, January 10, 2010.
So, don't take that tree down, just yet. Let's keep celebrating. And besides, isn't today the second day of Christmas? Yes, the twelve days of Christmas began yesterday and ends on January 5, the day before the Feast of the Epiphany (January 6), when the three Kings arrived in Bethlehem.
Posted by FA at 11:03 AM