Feast of the Holy Innocents

Today we celebrate the Feast of the Holy Innocents. This feast remembers those infant boys who were killed to protect the throne of Herod from the newborn King of the Jews (whose birth had been announced by the magi). This feast reminds us to protect, cherish and care for human life in all stages.

Collectively, the feasts we celebrate during these days are to remind us that the observance of Christmas cannot be isolated from the rest of the Church's observance of the Paschal Mystery (the suffering, dying, and rising of Christ); this is the reason he was born in the first place.
When Herod realized that he had been deceived by the magi, he became furious. He ordered the massacre of all the boys in Bethlehem and its vicinity two years old and under, in accordance with the time he had ascertained from the magi. Then was fulfilled what had been said through Jeremiah the prophet:"A voice was heard in Ramah, sobbing and loud lamentation; Rachel weeping for her children, and she would not be consoled, since they were no more."
Luke 2:16-18 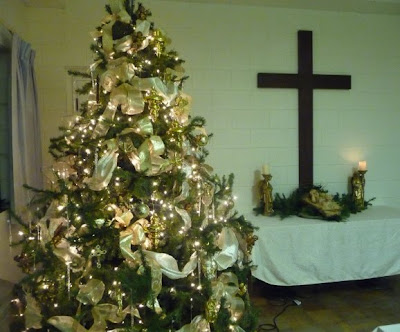 On another note, I would like to take this opportunity to mention that I am being transferred to another monastery, as of January 1. Although many people refer to me as a monk, technically I am not. A monk has stability to one particular monastery and it would be a rare exception that might take him away from that one monastery to another. I, on the other hand, am a friar. The word friar comes from the latin frater, which means brother. A friar is not attached to any one monastery and can be sent anywhere his Order has monasteries.

So, I have been asked to take up a new post in one of our two monasteries in Southern California. Although my responsibilities will be greater I don't foresee that it will be an obstacle from my continuing Monastery Daily Photo. So, please bear with me a few days while I spend a few days with my family and complete the transition.

In the meantime, please know that all of you, my blogger friends, go with me in my prayer.